This week the prompt from Any Johnson Crow is Longevity for the 52 Ancestors challenge.

This brought to mind the longevity of the Jordan family’s involvement with the Royal Canadian Artillery.

In 1871, William Jordan was the first soldier to join the newly formed company, the first to serve sentry duty and the first to sound call.
In the book Quebec ‘Twixt Old and New by George Gale 1915 on page 281, he writes…

”In response to the first “Fall In” call sounded by Trumpeter Jordan on the Citadel square, when “B” Battery was formed, but two lonesome looking individuals, who had accepted the shilling, strolled out from one of the casements and marched with fear and trembling to join him. They were in civilian dress, the first uniforms not having yet been borrowed from the local garrison artillery company. The three men resembled in some respects the three Graces – Faith, Hope and Charity – as they stood on the parade grounds. Their first fatigue duty was to take charge of a lot of iron cots on which their comrades were to sleep when they enlisted. On account, evidently, of Trumpeter Jordan being the senior man in the caps, he was the first chosen to do sentry duty at the main gate and had nothing more to make him look like a military hero than an old steel ramrod, that had been left as a souvenir by the Imperial troops. With this harmless weapon, Jordan made the most of it and filled in his two hours duty. However, in a few days, with the incoming recruits and Royal Artillery non-commissioned officers, there was no more play soldiering. Henceforward it was real military life. In 1908, during the Tercentenary celebration, Sergeant Jordan had the honour to be presented to the late Lord Roberts as the senior soldier of the Permanent Force in Canada.
That Bunker Hill cannon did not come out of its hiding place and occupy its position on the Citadel square with a brand new coat of paint, inscription and all for some time after the organization of “B” Battery.”… 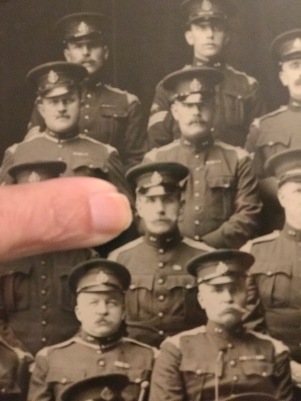 Peter Jordan at the Sergeants Mess

In total there was a Jordan family member in the Royal Canadian Artillery for over 100 years!

A great place to research your Canadian Military Ancestors is the Canadian Library and Archives website, which has some databases worth checking out.

← Crafting My Genealogy
1926 Canadian Census to be Released this Year →

2 comments for “Longevity in the Canadian Military”