The spread of illnesses is not a new thing for Canada or the world for that matter. When I think of it in reference to my own genealogy there are two instances that I recall reading about an ancestor experiencing an pandemic.

John Tipper who was living in Montreal in 1832 was killed by Cholera. John was a blind, retired soldier from the Royal Artillery, here is the brief mention I have of his passing.

John Tipper of Montreal, pensioner, died on the seventeenth day of June one thousand eight hundred and thirty-two aged sixty-two years and will be buried on the eighteenth following. Christ Church Montreal 17 June 1832

The other link to the Cholera was the reference to an outbreak in the obituary John’s granddaughter Hannah (Jeffery) Norton.

She [Hannah] was of a very charitable disposition, and was always foremost in alleviating suffering and distress. During the period that Quebec was visited with the terrible scourge of cholera, the late Mrs. Norton took a noble and active part in tending to those who were so unfortunate as to be smitten with the dreaded disease, and notwithstanding her unremitting attention to the sufferers, she was fortunate enough to escape it…. 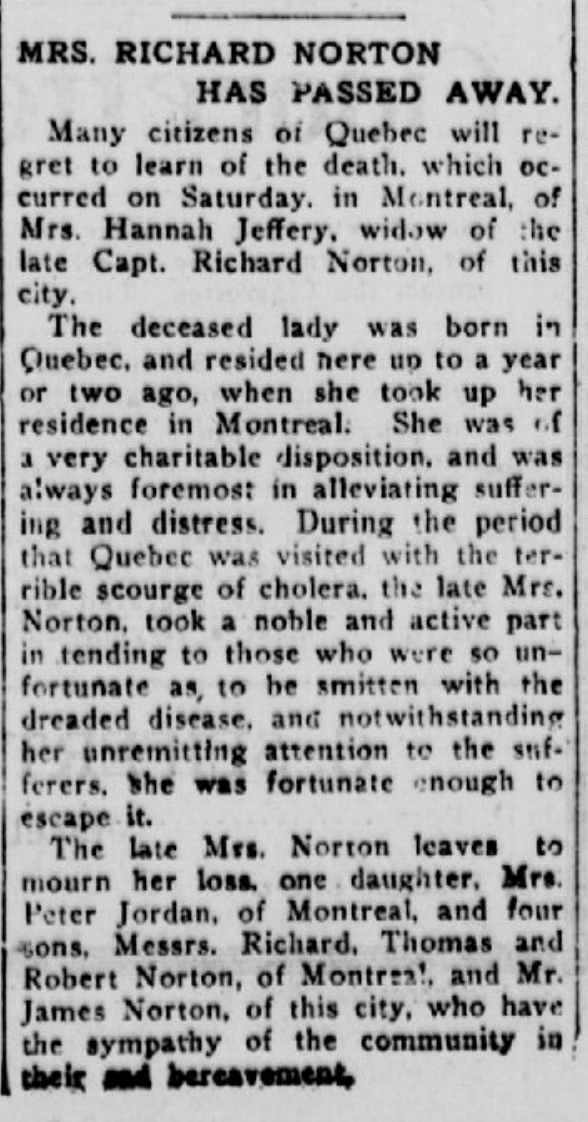 As Hannah was born in 1832 her involvement in treating Cholera patients must have happened in one of the subsequent outbreaks, likely 1851, 1852 or 1854.

Have you found connections to family members surviving past pandemics? Maybe now is the time to document our experiences as we live through this unique time.

For me, my journal entry reads, “…who would have thought that in hearing of Covid-19 and its implications, people ran out en masse and bought… toilet paper?”

2 comments for “How Has Past Pandemics Affected People in Your Family Tree?”