Robert Jeffery lived until he was 69 years old, and during his lifetime he was married three times and had twenty children.

Robert was one of three sons born to Robert Jeffery and Elizabeth Tipper, he was the only one to have children, and have them he did.

His next wife was Sara Duclos, they signed a marriage contract in May of 1856. Their marriage took place in the Catholic Church in Lévis, Quebec. Six children were born to the couple with only four that survived infancy.

In 1862 tragedy struck the family, when son Antoine drowned. I wonder if Joseph Dube who also died from drowning was with Antoine on that sad day. Antoine was Robert’s son from his first marriage. 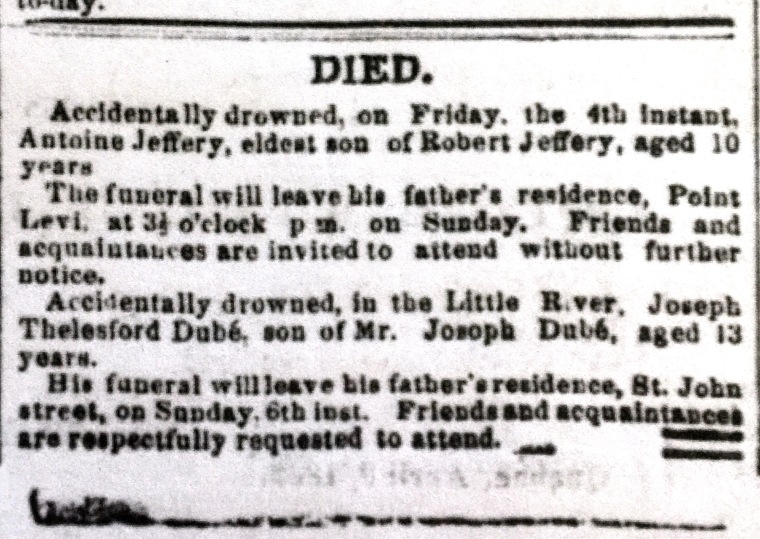 There are a few mentions of Robert in the Quebec Gazette, which is useful in understanding his financial situation. The description below mentions where his land was located. The second clipping from the Quebec Gazette is a judgement against him and sale of his land.

A lot of land next to Robert Jeffery’s for sale found in the Quebec Gazette, 9 Dec 1871

Sara Duclos Jeffery died in 1872 leaving Robert with seven children. In the space of a couple of months, Robert marries his third bride, Odile Brousseau. Together they had nine children and I have found that two of their children died at a young age. This would mean in 1886 when their last child was born Robert potentially had fourteen children living, likely his oldest children had moved on to households of their own. When Robert’s last child was born he was 59 years old!

In his lifetime Robert was a boatman, but I am not sure in what capacity. I picture him shipping product for merchants between Quebec City and Lévis but I am unsure at this point if that was the nature of his work.

There are numerous Notary records referring to Robert, many of the documents refer to business deals, leases and sales. I did find one Notary record dated 1873 (in English) in which Robert promises his sons Francois-Xavier, George & Robert Andrew that the deed he is signing will be ratified when they come of age. I am sure more treasures will be found when I focus on this area of my research.

Robert died at the age of 69 in 1897 and is buried in Beechwood Cemetery, Quebec.

Many of Robert’s children left Quebec and settled in, Maine, Massachusetts and other locations in the USA.

* I have to give credit to Dr. William Arthur Jeffrey who did extensive Jeffery research in the 1970s. Arthur was a descendant of Robert and his third wife Odile through their eldest son Arthur Theophile Jeffery. I did not have the pleasure of meeting Dr. Jeffrey as he passed away before I had an opportunity but someone shared his research with me. His research was my starting point of my genealogy research on the Jeffery family. Dr. William Arthur Jeffery’s memorial on Find-A-Grave