If you have any military ancestors in Canada it is likely that you are aware of the indexing of the WWI Soldier’s service records by Library and Archives Canada. They are over 1/2 done and the last update took us to the surname Russell.

Here a few other resources that can be investigated to help you in researching your military ancestor.

1) Commonwealth War Graves Commission – this site contains records of Commonwealth soldiers who were killed and buried overseas, including Canadian soldiers.

2) Veterans Death Cards is an underutilized resource when researching your WWI soldiers. These cards are not in a searchable index but are arranged alphabetically. Select the surname and scroll through until you find who you are looking for. It is not a complete listing but worth your time to check this resource. What is written on the card varies but you may find the soldier’s Reg, number, date of death, location and name of a surviving relative. 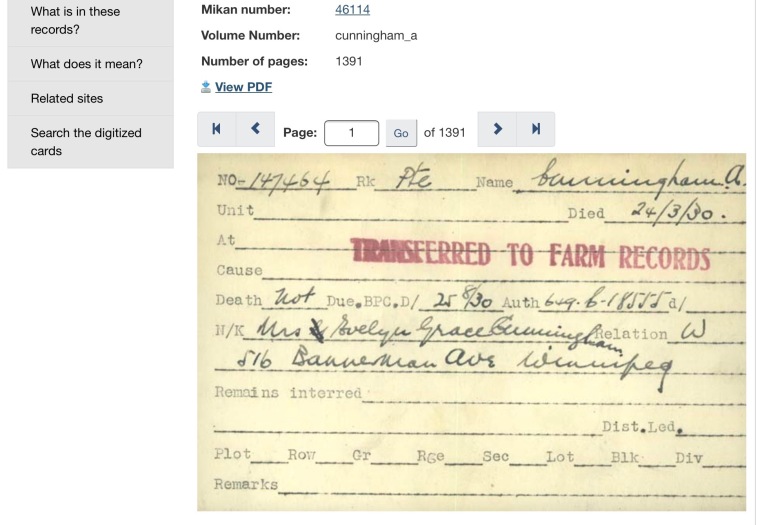 A screen-shot of the Veterans Index card page

3) Navy – again Library and Archives website is the go-to, you can request the 1910-1941 service files for the Royal Canadian Navy – thanks to Dianne Seale Nolan’s comment below I have adjusted this information. Diane also informs us that the Navy service files are not yet available online at LAC, only the index to the Ledger Sheets. With the info contained there, you can request a copy of the ledger sheet (13 cents but I wouldn’t bother, same info is in file) and a copy of the service file

4) Canadian Soldiers killed in WWII is available on Library and Archives website. If you have an Ancestry subscription ($$) you can view the full files.

5) Book of Remembrance – a page is turned once a year on the seven books memorializing Canadians killed in a war. From the site –

Do not over look searching for a Museum/Archives in the location where your ancestor was living. Many of them have memorial projects to honour soldiers who fought.

Alberta – South Peace Regional Archives is located in Grande Prairie and their project is to commemorate all the soldiers from the South Peace with a biography.

Manitoba – Hamiota Archives created a Wall of Remembrance back in 2016 that has the names of 750 soldiers.

Newfoundland – The Royal Newfoundland Regiment has an Archives dedicated to that Regiment.

Nova Scotia – The Yarmouth Museum and Archives houses newspapers from various years that would likely have reported on soldiers activity.

Nunavut – This Canada’s newest Territory and was not created until 1999. Nunavut Archives is who you would contact to inquire as to what is in their holdings for your veteran.

PEI – A search for ‘soldier’ on the Prince Edward Island’s PAROS collections database results in 116 photographs and 22 textual items.

Quebec – Have you ever wondered if your family took part in the battle on the Plains of Abraham? The National Battlefields Commission has a searchable index of soldiers who took part in 1759-1760.

Ontario – The British Isles Family History Society of Greater Ottawa has created a database of Canadian militia personnel not born in Canada.

it may be worthwhile to see if their holdings include soldiers if your family lived in the area.

Yukon – A search at the Yukon Archives on-line revealed a picture from the 1940s of a soldier standing in the snow and they have may have more in their holdings.

This is a small sampling of what different museums and archives are doing to honour our veterans.

Other Sites Dedicated to Soldiers

Historic Canada has a page dedicated to Black Canadian Soldiers.

Other sites with mentioning are the Canadian Virtual War Memorial and The Canadian Military Heritage Project.

This is a drop in bucket, there are numerous sites that contain information about Canadian soldiers. Dig in and enjoy researching and honouring the veterans in your family!